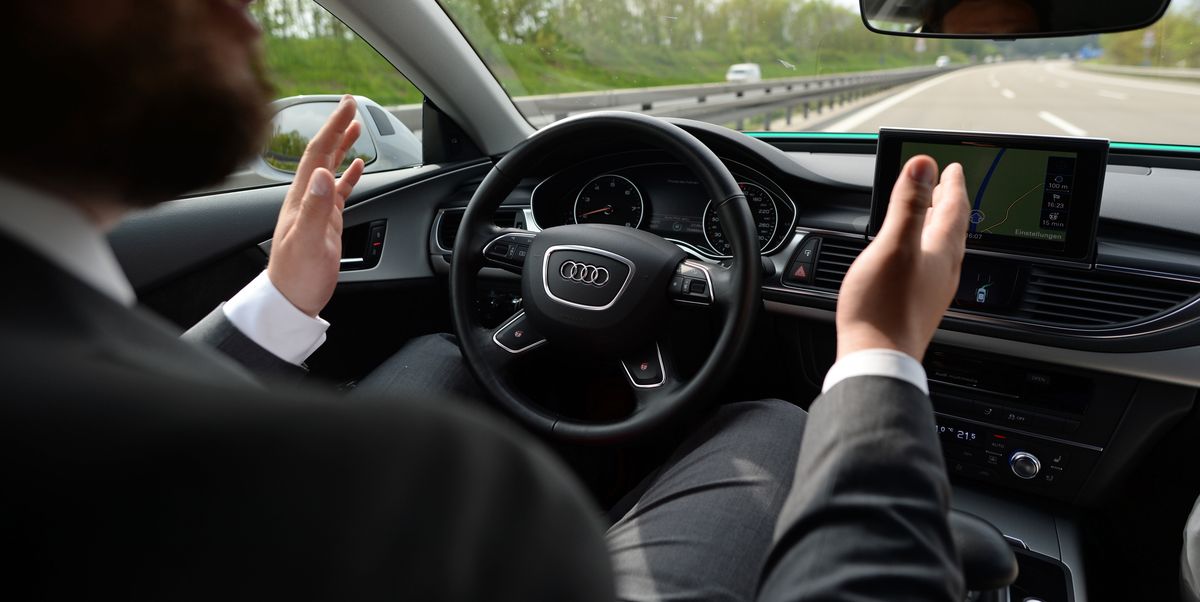 Back in the 1950s, George Jetson’s flying car was the transportation tech promised to be right around the corner. Now, it’s self-driving vehicles.

Google has cars piloting themselves around California, and have been doing so for years. General Motors and its Cruise Automation subsidiary are preparing to launch a self-driving taxi service sometime this year. But promises of reading a book or napping while your car ferries you off to work remain unfulfilled. The reality of self-driving cars is much more complicated and still years away from realizing the powers promised to the public.

Technological limitations remain along with unknown legal hurdles. If a self-driving car crashes, who’s responsible? We don’t know yet, and insurance companies aren’t eager to head to court to figure it out. That’s why the idea of getting into a car and doing nothing but picking a destination is fantasy—for now.

What Autonomy Actually Is

According to the Society of Automotive Engineers (SAE), there are six levels of semi-autonomous and autonomous vehicles, numbered zero to five. They are as follows:

A Level 0 vehicle isn’t a self-driving vehicle at all. It’s your standard, everyday car with zero advanced driver assistance systems. This vehicle lacks features like automatic emergency braking and adaptive cruise control. It’s a vehicle that requires a human to do all the driving.

A Level 1 self-driving vehicle features an advanced driver assistance system that can sometimes assist a human driver with operating the vehicle. For example, a Level 1 vehicle can steer (via lane-keep assist) or brake/accelerate (via adaptive cruise control) for the driver. However, it cannot do both simultaneously.

Level 2 of autonomy means the vehicle features an advanced driver assistance system that can control steering and braking/accelerating simultaneously under some circumstances (specific weather conditions or on certain designated roads). However, Level 2 vehicles require the driver to maintain focus and pay attention at all times, operate other vehicle functions, assist in mitigating any dangerous situations, and be ready to take control in the event of an emergency. Level 2 encompasses the often praised Cadillac Super Cruise technology General Motors introduced on the 2017 Cadillac CT6.

A Level 3 vehicle can control all aspects of driving in some circumstances through several advanced driver assistance systems working together. While the vehicle does control all aspects of driving, a Level 3 self-driving car requires the driver to take back control when requested. In all other circumstances, a human is needed to perform driving tasks. Audi’s Traffic Jam Pilot, introduced on the 2019 A8, is billed as a Level 3 system. However, it’s not coming to the U.S.

A Level 5 self-driving vehicle is a vehicle that can control all driving tasks in all circumstances. Here, human occupants are never involved in driving the vehicle under any conditions. At this point, we’re just the passengers.

These systems are the first steps toward self-driving cars—smaller pieces of a larger picture. They’re available today across a broad spectrum of makes, models, and price points. Companies like Toyota and Honda have made an effort to include many of these technologies and systems across their entire lineup regardless of trim.

The next step is to combine these technologies into one system that takes driving responsibility away from the driver. This is the challenge automakers and tech companies are struggling with. Wrapping all these systems into one cohesive package that works all the time will be the key that unlocks our self-driving future.

Implementation and Other Issues

Building the technology is only half the battle. Getting the car-buying public on board with cars that really drive themselves will take time. Polls show that many people, even the tech-loving younger crowd, are uneasy about the tech. Automakers and tech companies must carefully communicate what their self-driving technologies can—and can’t—do.

Insurance companies play with risk, and one risk they’re leery of is self-driving cars and the stepping-stone technologies many automakers are already implementing. You’d think new technologies designed to reduce crashes and save lives would lower insurance premiums, but that doesn’t appear to be the case. Such systems could raise insurance premiums, likely dissuading some consumers from choosing such a vehicle when the time comes.

Why would premiums raise? There’s more risk involved. Self-driving cars and driver assist systems are not created equal and are not perfect, and that increases risk, something insurance companies want to avoid.

Finally, the rise of autonomous vehicles is already giving rise to thorny questions about when humans hand off responsibility to machines, when they can’t, and how dangerous that transitions will be. Automakers are slowly introducing self-driving technologies into their vehicles. Many offer vehicles that would classify as a Level 1 self-driving vehicle, offering several advanced driver assistance systems. Tesla Autopilot, Volvo Pilot Assist, Mercedes-Benz Drive Pilot, and Cadillac Super Cruise are all Level 2 self-driving systems. Level 3 autonomy is coming to vehicles like the Mercedes S-Class and Volvo’s fleet. Entirely autonomous Level 5 vehicles are still years away. The internet of things has its own unique cybersecurity considerations, as for cyber security and Edge computing, there are a lot of unknowns IOT and edge security, for the edge at least there
Read More

An AI service that analyzes content in images Extract rich information from images Boost content discoverability, accelerate text extraction, and create products that more people can use by
Read More In the past five years, autonomous driving has gone from “maybe possible” to “definitely possible” to “inevitable” to “how did anyone ever think this wasn’t inevitable?” to "now commercially availabl
Read More